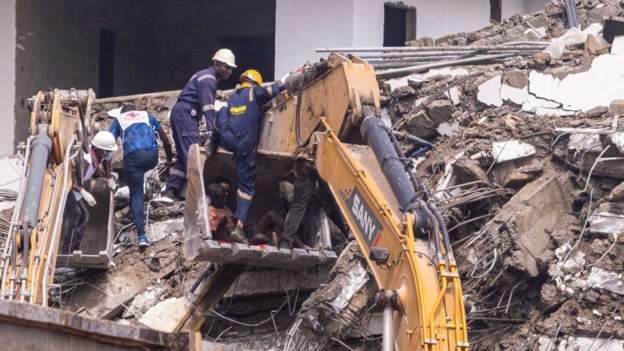 Following the collapse of a 21 storey-building in Ikoyi, Lagos state, while under construction, rescuers searching the rubble have found the body of the project’s owner. Friends confirmed the identity of Olufemi Osibona whose remains were uncovered late on Thursday.

Mr Osibona ran Fourscore Homes, the developer of the luxury apartment block which collapsed without warning on Monday.

The full number of deaths as a result of the building collapse is yet unclear though, latest figures say 36 persons died.

However, witnesses say more than 50 people were on site when the building came down, only nine have been found alive. The Lagos State authorities say investigation into the cause of the collapse is going, with a final report expected.

Many family members are frustrated at the rescue effort. They say the authorities were too slow to respond and don’t seem to be looking for survivors.

Support desks for relatives of the missing were only set up 48 hours after the incident. Some relatives complained it was too little too late.

Building collapses are common in Nigeria and experts say they’re due to a lack of enforcement of building regulations, as well as the use of cheap materials and inexperienced workers.