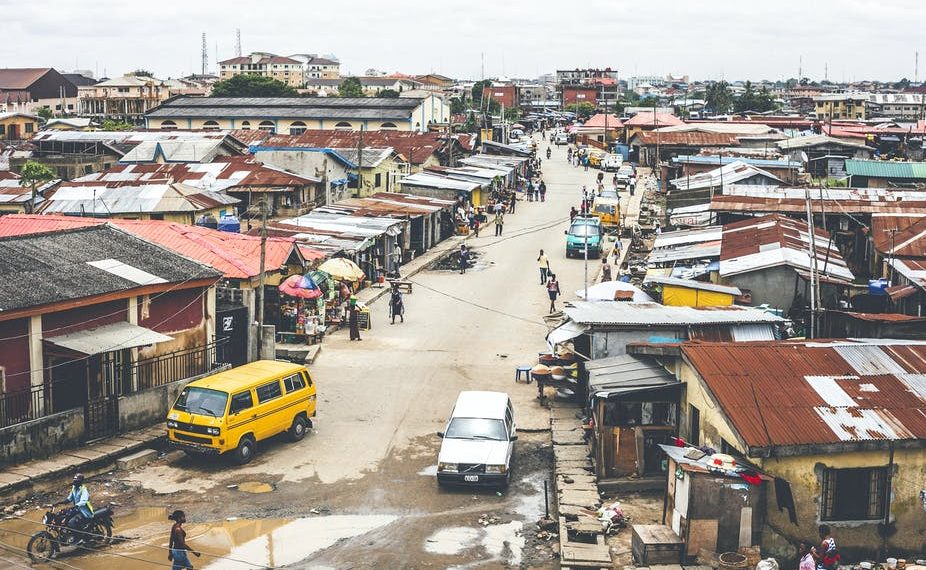 Yaro, who had moved to Big Bola from Kaduna three years ago, could no longer afford to pay his small amount of house rent to the slum lords – the name given to the long-term residents who informally run the area, collect rents and allocate plots. More than 100 people have been forced out of the slum over the last six months as cash-strapped households seek out cheaper accommodation, residents said, worsening overcrowding and poor sanitation in the hotchpotch of makeshift shacks.

It is named after a massive nearby rubbish dump, but people are queuing up to move into Abuja’s Big Bola slum as rents skyrocket in more salubrious parts of the Nigerian capital.

For the slum’s poorest residents, people like Raheem Yaro and his family, the influx has left them with nowhere else to go as the district’s so-called slum lords – who allocate homes in the area – order them to pack up to make way for the newcomers. “He (the slum lord) didn’t even give me enough time to find an alternative before leaving,” Yaro told the Thomson Reuters Foundation by phone from Kazara village in the northwestern state of Kaduna, where he and his family returned after their eviction.

“He just came to me one afternoon and said I had to leave the following day,” Yaro added. Nigeria’s consumer inflation rose for the ninth straight month to just over 21% in October, putting further upward pressure on housing costs in a country where about 80% of the population spends more than half of their income on rent.

On top of that, most landlords demand a full year’s rent in advance – an enormous stretch for low-income Nigerians. A bill aimed at changing that to monthly payments in the Federal Capital Territory, where Abuja is located, has stalled in Nigeria’s Senate. The problem is particularly acute in Abuja, where hundreds of thousands of people have moved after being driven from their home towns and villages by an Islamist insurgency in northeastern areas.

Planned to have a population of no more than 3 million people, Abuja is now home to some 3.6 million Nigerians, about 200,000 of whom live in slums including the Big Bola, which means Big Dustbin in the Hausa language. Yaro, who had moved to Big Bola from Kaduna three years ago, could no longer afford to pay his small amount of house rent to the slum lords – the name given to the long-term residents who informally run the area, collect rents and allocate plots.

More than 100 people have been forced out of the slum over the last six months as cash-strapped households seek out cheaper accommodation, residents said, worsening overcrowding and poor sanitation in the hotchpotch of makeshift shacks. “Our children are falling sick every day,” said Ibrahim Galadima, who has lived in Big Bola for five years.

CHOLERA CASES Access to clean water, electricity, schools and other vital services is scarce or nonexistent in the slum, and most people eke out a living in the informal economy.

Persistent rain in the last four months has damaged toilet facilities, and 22 cases of cholera have been reported in the area as much of the country battles an outbreak of the diarrhoeal disease commonly spread via contaminated water. Shoemaker Adam Bege, who recently moved with his family to Big Bola to save on rent, said his two young children had fallen severely ill with cholera in September and had to be rushed to hospital.

They recovered, but the medical bill of 150,000 naira ($340) has eroded savings destined to cover schooling costs. “We moved from a more comfortable home to Big Bola because we wanted to save money we could have spent on house rent for the school fees of our children,” said Bege, whose previous landlord hiked their annual rent by 50% to 150,000 naira.

“Now I’m using the same money I’ve been saving for education to treat my children,” he added, standing outside his two-room corrugated iron home, which lies beside a foul-smelling ditch. HOUSING CRUNCH

Slums like Big Bola are perhaps the most visible manifestation of profound income inequality in Abuja, where nearly 40% of residents live in poverty alongside a small elite, and of a chronic nationwide housing shortage. Big Bola’s sprawl of precarious shacks and unpaved alleyways lies a stone’s throw from high-rise apartments, offices and bustling markets.

The country of some 200 million people has a growing deficit of at least 22 million homes and the Federal Capital Territory accounts for 10% of that figure, according to the central bank. In Big Bola, many residents link the housing crunch to rising social tensions and crime including child sexual abuse and burglary.

“There’s quarreling and shouting every day,” Hadi Alamu, a private security guard who moved with his family to the slum in May after his landlord put up their rent. “There’s always bad news here.” The Abuja Environmental Protection Board (AEPB) – a local government public safety body – launched a security crackdown at the start of the year that targeted “criminals and armed gangs” operating in the slums, an AEPB official said.

Armed police have stormed into slums in dozens of raids, but residents and watchdog groups said they had sometimes used excessive force. Others say the campaign has led to harassment and extortion of the poor and vulnerable. “Sometimes, the people arrested are not the culprits but innocent young men and women who are stereotyped by law enforcement officials,” said Salome Gambo, a researcher at the rights group Caprecon Development And Peace Initiative.

“Girls walking in short skirts within their settlement and boys carrying dreadlocks are tagged as prostitutes and drug users respectively and harassed by the police,” Gambo said. The AEPB official declined to comment on such criticism.

For many of Big Bola’s residents, the stalled monthly rent bill is vital for alleviating the city’s housing crisis. The bill failed to advance in March following opposition from property industry associations. The bill’s sponsor, Sen. Smart Adeyemi, did not respond to a request for comment.

“We are now living like refugees because landlords want us to pay rent for an entire year,” said Alamu, the security guard. “If there’s a law in place for house rent to be paid on a monthly or bi-monthly basis, many people will have no problem paying.” ($1 = 442.9500 naira)

(This story has not been edited by Devdiscourse staff and is auto-generated from a syndicated feed.)