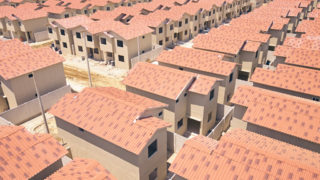 Earlier this year, it was revealed that Nigeria’s real estate sector grew by 3.8 percent, its highest in six years – this is according to the Voice of America. Major cities in the country, like Abuja, Lagos and Port Harcourt are known with expensive buildings that are in high demand. As the demand or sale of higher priced real estate increases, access to affordable housing becomes difficult for majority of the people in the country.

This is evident in the high number of Nigerians settling in suburbs of these major cities in the country.

According to Precious Nwajiaku who moved to Abuja last January, she said she had to stay with her friend in Mararaba, Nasarawa state, a town bordering the FCT.

“And, here is inside (far from the road), like off town. It is as well expensive, not even cheap.

According to Nwajiaku, her yearly rent amounts to not less than a hundred and twenty thousand Naira, for a room apartment that does not even come with, the basic amenities for a comfortable living.

“We pay for water but, there is no water inside. As you can see, there is no light and no good roads, she added.

Housing disparities reflect the country’s economic divide. The World Bank said 22 million persons in the country do not have the housing they need, this is the highest number in the world.

This is an issue the Nigerian ruling authorities have been promising to address for many years. In 2019, the ruling government promised to provide one million affordable houses yearly to help meet the increasing demand for proper housing by the populace.

However, experts say the country’s housing projects are not keeping up pace with the yelling demands from the people for affordable housing.

Adebayo who runs a yearly housing show tagged “The African Housing Show” that aims at bringing together stakeholders in the housing industry to discuss ways, through policy creation and implementation in improving housing development in the country, also warned that housing gaps will continue to get worse by the time the country’s population hits the estimated 400 million mark in 2050.

Banji Adeyemo, a Property Developer, said several factors are behind the high cost of building materials and the lack of affordable housing in the country.

“This is an era where foreign exchange has taken a new toll entirely, he said.

“Most of the construction materials have foreign inputs. The government need to hasten up to bring down the cost of land and this will reflect on the cost of production by developers for houses because, we don’t have control over other materials.

Recently, the country’s lawmakers were considering a bill that enforce the payment of monthly house rents, as against the yearly method presently in use. This is aimed at easing the financial burden faced by the citizens.

However, except more houses are built, experts say the gap will further widen and millions will keep suffering and facing housing challenges which is one of life’s most basic needs.

Additional Report from the Voice of America.