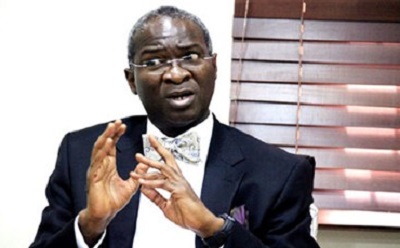 Nigeria’s Minister of Works and Housing, Babatunde Fashola, yesterday as a guest on Television Continental (TVC’s) breakfast show, said priority of the country’s President, Muhammadu Buhari’s government is to ensure that the second Niger bridge will be open for users before the turn of the year.

The bridge, which was planned years ago prior to the present administration is to ensure that a new bridge is put in place to complement the 50 year old existing one.

Fashola, 59 also said the entire stretch of the bridge has been completed.

The former Lagos State Governor while revealing that the second Niger Bridge is made up of two component parts – the bridge and other link roads, he explained that the latter at the Onitsha axis of the bridge have been completed, while the Asaba link roads are yet to be completed because, the ministry is currently settling issues of compensations. However, he assured that engineers are currently working on site.

“Our priority is to open the second Niger bridge to traffic by December so that those travelling for the season will do so at ease, Fashola said.

“We are committed to opening the bridge to traffic by December and I can assure you that, with the level of work done, the set target will be met, Fashola added.