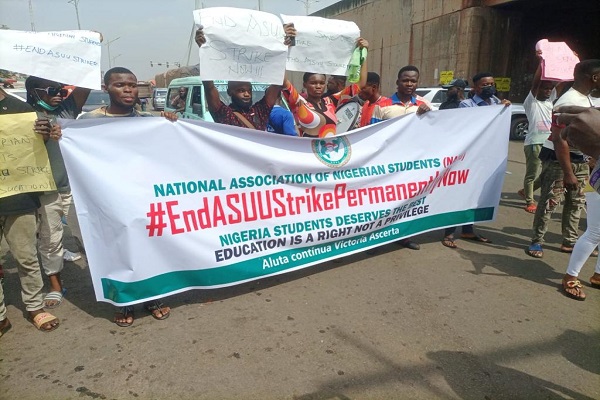 The National Association of Nigerian Students has asked that the country’s Minister of Works and Housing, Babatunde Fashola be stripped of his Senior Advocate of Nigeria (SAN) title following comments attributed to him.

The minister earlier yesterday in Abuja described as illegal, the blocking of the Lagos-Ibadan Expressway by the protesting students.

NANS had on Tuesday began a protest Lagos-Ibadan Expressway known for huge traffic. They demanded that the Nigerian government bring to an end the ongoing strike action of the Academic Staff Union of Universities for students to resume academic activities.

The PUNCHsaid it got a statement late Wednesday from NANS, through its National Public Relations Officer, Giwa Temitope, asked the Legal Practitioners Privileges Committee in Nigeria to withdraw Fashola’s SAN title.

“We have been informed that the Minister of Works and Housing, Babatunde Fashola, openly said that: ‘The right to protest is a very well-protected right in our Constitution, but it does not include the right to inflict pain and inconvenience on other people, the Punch reported.

“And so, whilst the protests can go on, they should refrain from blocking the road in order to do their protests. That in itself is a violation of law.

“The statement above shows that the Minister is enmeshed in a big contradiction in terms of what the law says. He tries to trivialise a very important issue by watering down the law.

“Asides from the clear nature of the letters of Chapter four of the Constitution on Fundamental Human Rights, Fashola should tell us how a protest is stated to “inflict pain and inconvenience on other people?

“As far as NANS is concerned, Fashola has long shown that he does not understand the laws of Nigeria. Same person, who has a SAN title to his name, went ahead to attempt to destroy evidences on the very crucial Lekki massacre. Nigerian youths do not respect Fashola and his fake ideals anymore.

“The best is for the Minister to go and make restitutions with the President, Major General Muhammadu Buhari (rtd.)’s government to pay ASUU now rather than appeal for a suspension of the protest we have begun.

“If Fashola continues to tongue-attack our protests, we would start preparing to prevent another attack on our movement,” NANS said.

NANS further alleged, “We know that same Fashola has started contacting government agents and thugs to attack us. We want to put it on notice that should anything happen to our students in any part of the country, we will hold Minister Fashola responsible.”

The student body also called on the ASUU branch of the University of Benin to “start the process of withdrawing Fashola’s Law degree. Just as we reiterate our demand for a meeting with ASUU leadership soon, we need constructive synergy to win these struggles.”

“Finally, we apologise to all our parents and friends who have been affected by these protests. We appeal that we are condemned to act in such a way as the education of Nigeria at all levels is at stake. And as you know, a nation that fails to care about education is planning to pay heavily for the consequences of mass ignorance.

“And, we also state that there is already a taskforce in place to enforce compliance which is headed by a former Vice President of the association, Ojo Raymond. So, there shall be no going back and we shall continue this struggle,” the statement concluded.