One Die As Building Collapse In Kano State 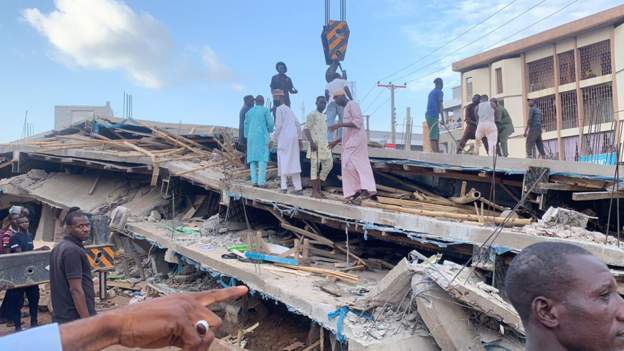 Nigeria’s National Emergency Agency (NEMA) in the northern Nigerian state of Kano say at least one person was found dead in rubbles caused by a three storey building collapse in a market, while several others sustained varying degrees of injury and taken to hospital for treatment – most of them with “minor” injuries.

It also said rescue operations have ended but witnesses say others were still trapped inside.

However, NEMA added that one of those wounded has multiple fractures and is still in hospital.

”We have finished searching through the rubble.

We believe there are no more people trapped. So, the rescue operation has ended,” an official of the agency told the BBC.

The building consisting dozens of shops was under construction. It was not immediately clear why it came down on Tuesday evening.

Building collapses are common in Nigerian cities and are mostly blamed on disregard for building regulations and a lack of safety measures. They often result to deaths.

President Buhari Acknowledges Regular Updates Of Flooding In the Country

FMBN Remains Committed to Providing Affordable Housing For The Disabled

FMBN Remains Committed to Providing Affordable Housing For The Disabled