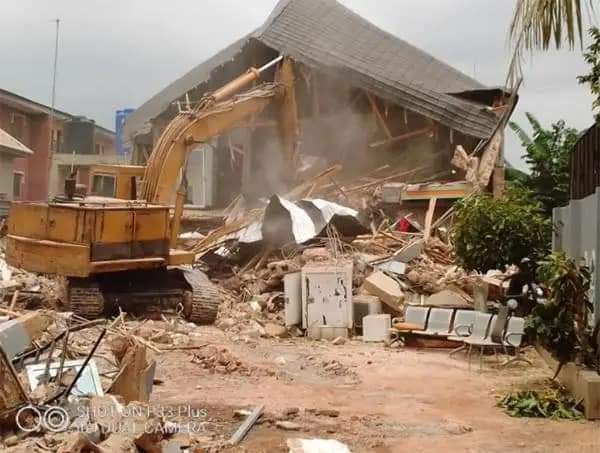 According to the News Agency of Nigeria (NAN), most of the affected structures were residential buildings, shanties, batchers and kiosks sitting on the right of way (ROW), under train bridge, and pedestrian crossing in and around the Village, off the Airport road.

The Director, FCTA Development Control Department, Murkhtar Galadima said the structures demolished were part of the 500 uncontrolled developments marked for demolition in the area.

Galadima said that adequate notice was issued to the occupant of the illegal structures prior to the demolition.

“It is part of our regular exercise to sanitise the city, and in furtherance of the Nnamdi Azikiwe Airport expansion project being awarded by the Federal Executive Council, he said.

” We are to clear all these uncontrolled developments before the commencement of the project. There are over 500 and we have so far removed close to 350, and we are coming to continue with the marking and removals”.

Mr Ikharo Attah, a Senior Special Assistant on Monitoring Inspection and Enforcement to the FCT Minister expressed that the area has multiple levels of illegalities.

” As underneath the main train bridge connecting the Nnamdi Azikiwe International Airport is full of shanties and the whole community has turned into shanty, and being security threat, he stated.

“The whole community is wrongly built, thereby defacing the area, as the community has been expanding extremely. Although, good people are in the community, but the bad ones have easy access to hide and commit havoc.

“Even the native Chief and some of the locals agreed that Bassa- Jiwa needed to be cleaned, and did that while respecting some of the previous markings we had in the community for resettlement and compensation of some indigenous persons.”