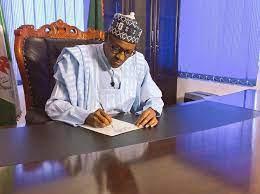 Nigerian President, Muhammadu Buhari yesterday approved the allocation of housing units in the National Housing Estate across the country to 22 members of the Nigerian senior football team who won the 1994 African Cup of Nations in Tunisia.

Represented by the Minister of State of Foreign Affairs, Amb. Zubairu Dada, at the official commissioning of housing projects under the National Housing Programme (NHP) Phase1 at the Three Arms Zone in Minna, Niger state, the president said that the members of the Super Eagles would be free to select any house in any of the estates in the housing projects across the country.

“This provides an opportunity to remember our heroes, the valiant Super Eagles to whom our country made a promise of providing housing for winning the 1994 African Cup of Nations, which has remained unfulfilled, the President said.

“On behalf of the Federal Government of Nigeria, I feel proud and privileged to redeem the promise Nigeria made to these patriotic Nigerians, even if belatedly.

“As the saying goes, it is better late than never and I have approved allocation to redeem the outstanding allocation to 22 members of the Super Eagles in National Housing Estate located in their state of choice.

“Their keys and title documents will be handed over at the commissioning in their state while the remainder of the housing is allocated to willing members of the public,” he said.

The president added that the housing estate “is an example of the fulfilment of the promise of change and to provide affordable and accessible housing to Nigerians.

“This is one of the projects undertaken by our government in phases since 2016 when our party, the APC sought your mandate to form the government in 2015, one of the things we promised was change.

“We certainly cannot meet every one of those Nigerians in person, but our economic policies and investment in infrastructures such as this National Housing Programme and others will reach and positively impact many of the people”.

FMBN Lists Achievements Made Over the Past Five Years