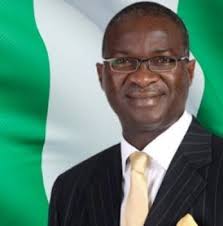 He made this known in Abeokuta, the capital of Ogun state at the handover of the Federal Government intervention of internal roads at Aro Neuropsychiatric Hospital, Abeokuta.

1.3km internal road was rehabilitated by the ministry on behalf of the Federal Government.

Represented by Umar Bakare, the Federal Controller of Works in Ogun, Fashola said another 17 roads were ready to be handed over, while attending to 30 other roads in various institutions across the country.

He noted that the infrastructure gap which was being bridged by a gradual process of repairs, renewal and construction on major highways was also being replicated in schools and federal institutions.

“It is undebatable that quality of health care delivery will be impacted by the quality of infrastructure and the environment and those who doubt it should simply listen to some of the feedback from staff in the hospitals where this type of intervention has taken place.

“The students are expressing renewed enthusiasm with regards to attending classes because some defective roads have been restored to good condition.

“This is consistent with our progressive ideal of improving the human condition and that process continues here today as we hand over this one in Neuropsychiatric Hospital, Aro, Abeokuta as a critical intervention to support education,” he said.

Fashola submitted that no fewer than 50 persons were employed and in the process, contributing to the job creation initiatives of the government.

He expressed the hope that the hospital management would ensure proper usage of the asset while shielding it from being abused.