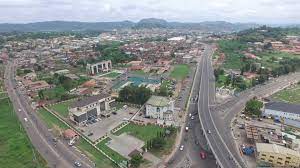 Aerial view of Ado Ekiti, the capital of Ekiti State.

Residents of Ado Ekiti, the capital city of Ekiti state had their homes and properties worth millions of naira destroyed following torrential rainfall that lasted for hours during the week. Mostly affected were the Balemo and Tinuola residents, off Afao Road in the state capital where flood submerged over 10 buildings.

“There was a torrential downpour on Monday evening and again on Wednesday night, which led to flooding and some buildings submerged in water, forcing residents to temporarily flee their homes,” one of the affected residents, Mr Blessing Oladele was quoted speaking to journalists.

Also read: Heavy downpour the cause of recent flood in Jalingo –NHSIA

“The rainfall led to the Elemi stream overflowing its banks, which resulted in fast-flowing flood that submerged some houses in the area.

“It affected about 10 buildings and we would have recorded casualties, but for the fact that we quickly ran out of our buildings with our wives and children to seek refuge in safe neighboring houses.

“Apart from affecting some of the building walls and foundations, we have lost other valuables like electronics, clothing materials, beddings , chairs, rugs, kitchen utensils to this flooding.

“The carnal was dredged during the first term of Governor Kayode Fayemi, but it has been blocked by debris Which I believe caused the blockade that led to the flood”, he added.

Chairman of Ekiti State Emergency Management Agency (SEMA), Capt. Sunday Adebomi, acknowledged that the agency was aware of the incident.

He said that they will have an on- the- spot assessment of events to know the extent of damage and how best to intervene to control flooding in the area.

Ensuring stricter use of pedestrian bridges