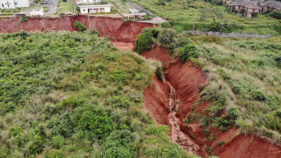 Participants at a forum organised by the Nigeria Erosion and Watershed Management Project (NEWMAP) have lamented collapse of the nation’s ecosystem.

They said the collapse had serious consequences on erosion and climate degradation, hence, the need for sustainable and proactive intervention measures to restore the ecosystem.

The experts said this at a one-day summit on this year’s World Environmental Day theme, “Ecosystem Restoration,” which was held at the Abia State’s Women Development Centre, Umuahia.

Others were the state chapter of the Nigerian Institute of Town Planners (NITP) led by its former Chairman, Chief Nelson Nwosu, students and staff of tertiary Institutions.

The state’s NEWMAP Coordinator, Izuchukwu Onwughara, who warned that Abia State was prone to flooding this year, called for proactive measures to address the issue.

The measures he listed to curb the menace include, planting of trees and not felling them, avoiding un-necessary bush burning and building on waterways, relocating residents from flood prone areas.

The forum lauded governor Okezie Ikpeazu, for exhibiting political will to key into NEWMAP’s interventions in the areas of environmental degradation and ecosystem changes and challenges.

Participants also commended NEWMAP for undertaking and delivering effective services to the people across the state equitably and so doing the needful to address their environmental challenges.