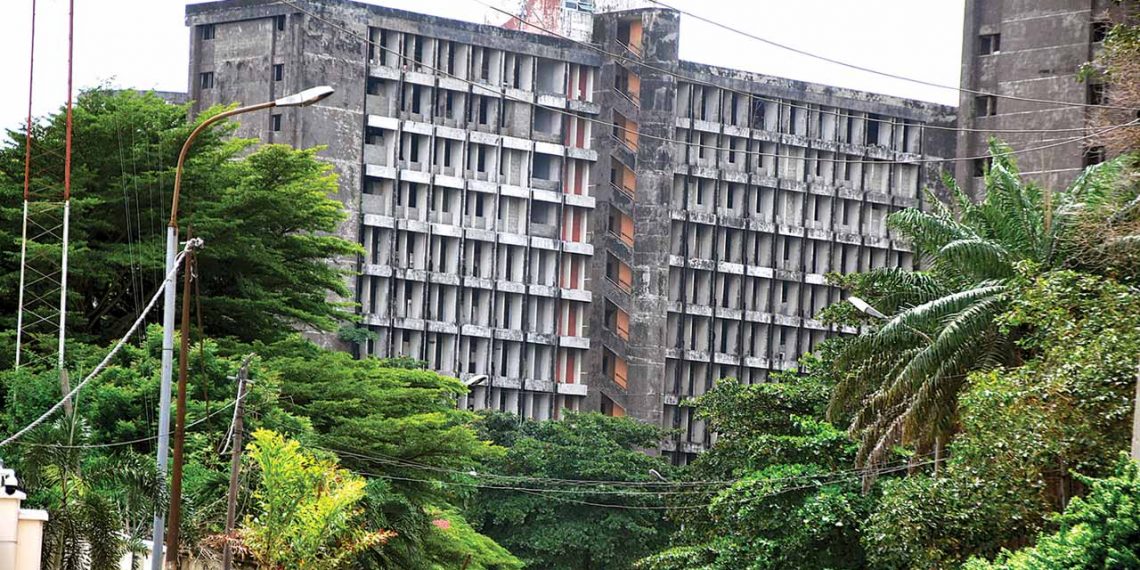 Concerns have continued to mount over abandonment of Federal Government buildings in Lagos, the nation’s commercial nerve centre.

Some of the buildings, which have been overtaken by grass are seen as environmental problems in various locations, and described by experts ‘as mockery of a nation’s ability to manage its assets’ for the benefits of the population.

Apart from the present state of perpetual dis-use and rots, millions of naira is lost from what could have served as veritable sources of revenue, if the properties have been put to use particularly, rent out to investors.

The buildings are mostly located in Lagos Island and include, the old Federal Secretariat Complex in Ikoyi, the Nigerian External Telecommunications (NET) building in Marina, the Defence House (formerly Independence Building) and the former Navy Headquarters building in Marina.

The Guardian learnt that the political will to revive some of these monuments as well as legal tussle among parties have led to the present state of the buildings. This, professionals in real estate observed, has robbed the nation of over N3.5 billion potential revenue from the facilities.

Specifically, there were earlier efforts by Federal Government to sell Federal Secretariat Complex in Ikoyi, a landmark edifice developed by the then military government of Gen. Yakubu Gowon to private individuals. But, the move failed because the buyer- hospitality and leisure company, Resort International Limited (RIL), wanted to use it for purposes that were against the Lagos master plan for the area.

The 12-storey Federal Secretariat Complex in Ikoyi, Lagos was abandoned in 1991. The complex developed in 1976, served as the engine room of the Federal Civil Service, but is presently in a state where the major components such as doors, windows and other fittings are in disarray.

The old federal secretariat building in Ikoyi was advertised for bidders in a hotly contested bid, which was won by Resort International Group as the preferred bidder.

Investigation shows that Dr. Wale Babalakin, who won the bid for the secretariat with an investment of N7.2 billion, had planned its conversion into housing units.

But the plan, which would have accommodated 480 families, didn’t go well with the Lagos State Government, which opposed the idea of converting it into a residential area. Lagos obtained a court injunction barring anyone from doing anything with the complex and up till today, nothing has been done there.

Owner of the firm, Babalakin, had explained the controversy surrounding the project. “After we came up with our own ideas of converting the place to apartments, interests began and these interests were negative interests. We paid N7 billion for the property in 2005. We moved to site around December 2015. We had completed the design, totally prepared the buildings, and removed all partitions for construction.’’

He said two years later, “some people claiming to be agents of Lagos State Government overran the place and stopped us from building.

“We discovered that the argument was that the building ought to have been sold to state government and not anybody else. We lost an unthinkable amount of money, but fortunately for us, our lawyers anticipated the interference and had provided in the agreement that the Federal Government would be responsible for obtaining a no-objection approval from Lagos State Government, if necessary.

“So, it was actually the Federal Government’s responsibility to protect us from the state government. I continue to thank the body of lawyers, Babalakin and Co; they have really supported me in my various endeavours because without that clause, today, we would have been orphans. Because of that clause, we went to arbitration against the Federal Government and we won. We will resume work as soon as all the ancillary issues are sorted.”

The architect involved in the Federal Secretariat redesign, Mr. Tayo Babalakin, told The Guardian that the present state of affairs is not something he could disclose to the media.

“The matter is an arbitration and not for the public but a private affair,’’ he said.

In the case of the Nigerian External Telecommunication Building with about 160 metres and 32 floors, used to be the tallest building in Nigeria and in West Africa. Located at No.15 Marina road, the building was completed in 1979; it was popular with two names, NITEL and NECOM.

The building once represented a national heritage for engineering strength and innovation. As NITEL has become a thing of the past, the high-rise property is a shadow of itself.

Speaking on the dilapidating state of the properties, a professor of estate management at the University of Lagos, Austin Otegbulu called for a comprehensive inventory and asset audit of the properties indicating their location, current liabilities, current use and possible alternative uses.

According to him, there was a need for a detailed schedule of dilapidation, associated cost, determine their uses and market value.

Otegbulu, who was a member of the board trustees of the Nigerian Institution of Estate Surveyors and Valuers (NIESV), said government should, “Find out the ones that would generate better investment returns through partnership with the private sector and those that could be sold in their current state. Some could be reallocated to other Ministries Departments and Agencies (MDAs) instead of renting office space at extra cost.”

He warned that the longer the properties stay without renovation or disposal, the more they will deteriorate and lose value.

He said, “The federal secretariat in Ikoyi was sold to a company but it appears they are having some challenges with the state government with regard to redevelopment approval.”

“Whatever is the challenge can be settled through mediation instead of allowing the assets to be wasting. Estate surveyors would be of much assistance to the Federal Government in proffering solution as it lies within their professional competence and terrain.”

The Chairman, NIESV Faculty of Housing, Mr. Adeshina Adiatu, reiterated the need for the Federal Government to concession or sell the properties to private sector participants.

He said the Federal Government should maintain the properties and rent them.

“Recently, the Central Bank of Nigeria and Bankers Committee commenced the revival of the National Theatre. The same should go for other properties abandoned.

“These are prime properties worth billions of naira wasting away. It needs to be put to optimal use. There is shortage of units and these ones rotten away can be rehabilitated or remodeled for current needs and effective use.”

He advised that the court case on the Federal Secretariat, should be settled out of court adding that the Federal Government and Lagos State should sit down and sort things out through Alternative Dispute Resolution mechanism (ADR).

Meanwhile, message sent to the Group Corporate Affairs Manager, Resort International Limited, Mikail Mumini, requesting the latest on the matter was not replied as at the time of filing this report.

Also, efforts to get reactions from Lagos State Government through the commissioner for physical planning and urban development, Dr. Idris Salako, were unsuccessful, as he didn’t reply messages sent to him.
The Guardian