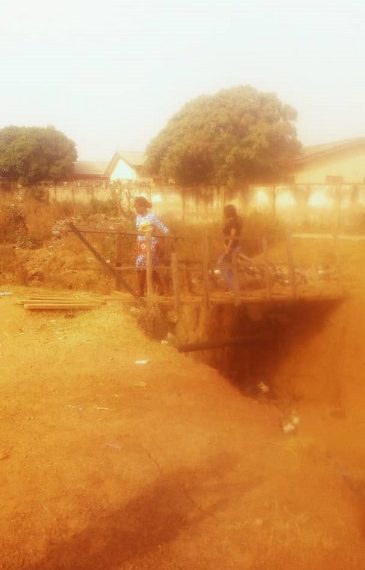 By Ladi Patrick and Jummai Abu

Residents of Nyaya Federal Housing Authority (FHA) Estate in the Federal Capital Territory (FCT) are lamenting the hardship caused by the collapse of a major bridge in the estate.

The bridge which is across a stream that divides the estate into two parts is said to have been rendered unusable when a contractor started work on it.

Viewpoint Housing News observed that instead of building a bridge, the contractor constructed a culvert.

There is no construction signboard and the contractor who remains unknown was said to have abandoned work on the bridge due to poor mobilization sum.

For two years, only pedestrians can clumsily cross the stream on a makeshift bridge. Motorists cannot cross.

Residents who spoke to our reporter lamented that this has caused them hardship for two years.

A resident, who spoke to Viewpoint Housing News on the basis of anonymity said the collapsed bridge rendered her jobless as passers-by who used to patronise her no more pass by her shop for lack of bridge across the stream.

According to her, “Due to lack of bridge, I have to close down my shop because nobody comes to buy from me, yet at the end of the year, I must pay the landlord.

“I had no choice but to shut down the business to avoid getting into trouble with the landlord.

“As you can see, I have moved the provision business to the house and my children have finished the goods, so I am now jobless.”

Mohammadu Sani, a refuse truck pusher said the collapsed bridge has affected his business as he always has to go round the estate to convey thrash to the dump site.

Sani said, “With the collapse of the bridge, I now have to spend almost an hour pushing the truck for a distance that should take me less than 30 minutes.”

Haruna Adejo, an elder in a mosque close to the collapsed bridge expressed disappointment with Abuja Municipal Area Council (AMAC) for failing to take action, saying the contractor abandoned the bridge because of insufficient funds.

He said the culvert built by the contractor endangers the lives of residents especially during the rainy season.

He said many who come out early in the morning to pray in the FHA Estate Glass Mosque face difficulty crossing the wooden bridge.

“My house is on the other side of the stream; so for me it’s a difficulty,” he said.

He called for the construction of the bridge to ease movement, saying many complaints have been lodged with AMAC chairman Mr Adamu Candido and the AMAC/Bwari Federal House Representatives Member, Philip Aduda.

Appeals were made to the municipal council and the FCT administration to act.