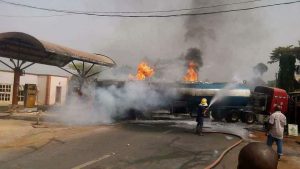 About 15 shops and 10 vehicles were razed at the Mechanic Village, Abakaliki, the Ebonyi State capital, in the early hours of yesterday.

The cause of the inferno, which started at about 5:00a.m. was yet to be unravelled as at the time of writing this report, but allegations were rife that the cause might be connected with the leadership crisis rocking the market.

Last Friday, there was pandemonium in the artisans’ market when some suspected thugs invaded the business premises to disrupt commercial activities over the botched election by the artisans.
The hoodlums, suspected to be hired, also set up bonfires as they rampaged. Save for the timely intervention of a team of policemen, the situation might have gone bloody.

One of the victims, Mr. Christian Enwerem, lamented that his shop, which was razed had some equipment, including calibrating machine worth N3 million, motor parts and items belonging to his clients. “I was in my house at about 7:00a.m. this morning when somebody called and asked me to come to shop immediately. He said everywhere was on fire and our workshop has burnt to ashes.
“When I arrived, I discovered that my workshop has been razed. We don’t have electricity here. My injector calibrator machine and motor components spare parts inside the shop were gutted by fire,” he lamented.

Caretaker Chairman of Nigeria Automobile Technicians Association (NATA) in the market, Chidiebere Uzo, while speaking to newsmen, expressed sadness over the disaster. He alleged that it was masterminded by enemies of the mechanic village. “I was in my house this morning when I received a call from one of the security men that there was fire in the mechanic village. I engaged many security men to be guarding the mechanic village, but the crisis we had last Friday stopped them from coming here again. So, some of them called at about 5:30a.m. and said the place was on fire. “I had to drive to the mechanic village and rushed to the fire service office to alerted them. Before we could get to the scene, vehicles have been burnt to ashes, and shops have also been burnt.

“But, I must tell you that the fire is suspicious. There are four burnt tires in four different locations where the fire emanated from. It is not an ordinary fire. It is a planned deal and I wonder what the person who did it will benefit from it. Soon, they will be fished out because they cannot succeed, no matter the way they planned it,” Uzo said.

Police spokesperson in the state, Loveth Odah, confirmed the incident, but dismissed the allegation by some artisans that the fire was masterminded. She said preliminary investigations showed that the fire might have been caused by phone batteries connected to the electricity