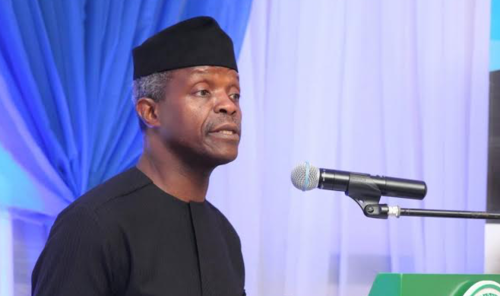 Vice President Yemi Osinbajo has urged stakeholders in land management to identify and address every imaginable problem that has hindered land administration and management in Nigeria.

He gave the charge in Abuja on Monday while declaring open the National Stakeholders Dialogue on Land Reform in Nigeria, organised by the Presidential Technical Committee on Land Reform (PTCLR).

According to him, a good number of the security issues facing the country, whether clashes between herdsman and farmers, boundary and border disputes or the debate around resource control and fiscal federalism, are firmly rooted in the land.

He said it was essential that we paid full attention to how we “maintain, use and allocate and deploy land” for the country to derive maximum value from it and that it became a catalyst, not for anguish and tension, but instead for lasting prosperity.

“In any event, if there is one thing we cannot afford to do, it is to bury our heads in the sand and hope that somehow, our land issues will on their own inevitably find a resolution.

“We equally cannot afford to act unilaterally, without regard to the wide range of views and opinions held by various stakeholders, as well as the experiences of various countries and peoples who have attempted land reform efforts.’’

The Vice President said that out of the vast land resource of the county only three percent had appropriate titles, saying that something must be done to enable its return to an economic tool.

Osinbajo addressed the criticism around the country’s land use Act and noted that regardless of whatever ideology position one took on the ownership and administration of land, the role of the state was indisputable.

“We can debate the scope of this role, but not the fundamental principle of the presence of the state as the primary guarantor and enforcer of the integrity of the land and property rights that are created from it.

“Consequently, to maximise its potential, land requires the consistent operation or implementation of considered policies and laws,” he added.

The Vice President noted that land reform was at the centre of the Buhari administration’s economic policy.

He said that the administration had over the last three years worked consistently to revamp Nigeria’s economy and set it on the path of sustainable growth and true prosperity.

“Our Economic Recovery and Growth Plan (ERGP) sets out the vision in very clear terms, as well as the path that we intend to take to achieve that vision.

“In line with this, we are prioritising agriculture and solid minerals, investments in transport and power infrastructure, and the creation of an enabling environment for business and investment.

“All of which are impacted by the security of, and access to land; and land management and reform will have a great impact on our ability to achieve them,” he said.

Osinbajo noted that one of the key issues that the World Bank assessed on the country’s Ease of Doing Business was the ease and cost of registration of property, with the and as a major component, and also the ease of dispute resolution.

He stated that based on the assessment, the country’s Ease of Doing Business Index climbed an unprecedented 24 places in 2017.

Said he: “In fact, one of the sub-components of the overall index is a Quality of Land Administration Index.

governments and other stakeholders cooperate with the committee to ensure the adoption and implementation of Systematic Land Titling and Registration (SLTR) in all the 36 States and FCT.’’

Osinbajo noted that the land reform conversation was far from being unique to Nigeria, adding that there was so much the country could learn from the experiences of other African countries, such as Rwanda, Kenya and South Africa.

He said that the description by some experts of untitled land as dead assets is both intuitive and practical.

“To create wealth, land must be tangible, like money it must be a medium of exchange, especially in its role as collateral.

“This is the only sure pathway to sustainable economic empowerment for all especially the rural poor.”

He praised the presidential committee for its vision to address land issues and said that its recommendations to the National Economic Council (NEC) were well received and being approved.

“I understand that the committee has since refined these regulations further, in line with NEC directives, and have now submitted them to the Cabinet Secretariat for the consideration and approval of the National Council of State.”