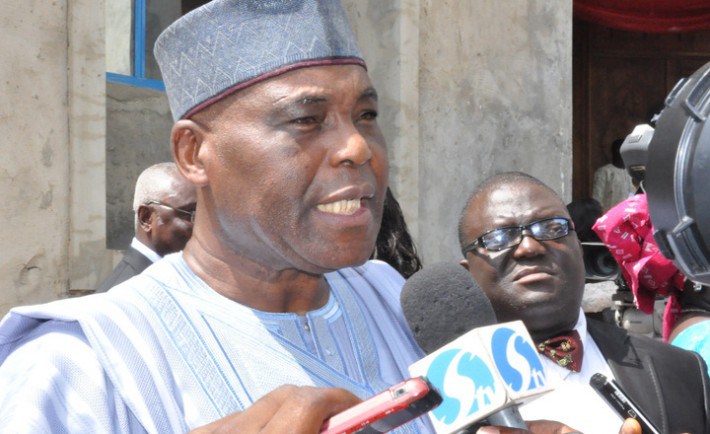 Ayobami Oluwarinu, a witness in the ongoing trial of former DAAR Communications Chairman, Raymond Dokpesi, told the Federal High Court, Abuja that he received about N68 million for renovation and building work.

Oluwarinu, the 13th prosecution witness, told the court on Wednesday while being led in evidence by the prosecutor, Oluwaleke Atolagbe, that he was a Lagos-based architect hired by Mr Dokpesi.

He told the court that he became aware of the case after receiving a call from the Economic and Financial Crimes Commission (EFCC), to clarify what the moniney paid into his company’s account was meant for.

“I got a call from EFCC that I should come to the Abuja office and clarify the transactions that took place between my companies and DAAR Investment Ltd., which led to the transfers to my account.”

The bank document which showed the transactions was tendered before the court by the prosecutor.

The witness confirmed that money was transferred on six different dates into the accounts of two of his companies, Archisynthesis Ltd. and Wood Country Investment Ltd.

He said that Archisynthesis was a design and building firm, while Wood Country Investment Ltd. was into general business and supplies.

He added that the money was for design, construction and renovation works at Dokpesi’s country home at Aghenegbode in Edo and DAAR Communications studios nationwide.

“One of the studios work is at Kpaduma, Asokoro, Abuja. Others are located across the country, because I’m his sole architect,” the witness said.

When asked if there was documented evidence for the contract to build and renovate, Oluwarinu said that he had worked for Dokpesi since 1993 and documentation had never been an issue.

“I cannot recall whether we had an oral or written agreement for the jobs because my relationship with him is cordial and I have worked for him since 1993.”

During cross examination, the witness told Kanu Agabi (SAN), that he had worked for Dokpesi since 1993 because of his integrity and forthrightness.

Earlier, Mr Dokpesi was re-arraigned on a seven-count amended charge for allegedly receiving N2.1 billion from the Office of the National Security Adviser without executing any contract.

He pleaded not guilty to the amended seven-count charge.

The judge, John Tsoho, adjourned the matter until May 28, for continuation of trial.

Mr Dokpesi and his company, DAAR Investment Company Ltd. were initially arraigned on December 9, 2015 before Justice Gabriel Kolawole on a six-count charge bordering on money laundering and procurement fraud.

The matter was transferred to Justice John Tsoho, where they were re-arraigned on Feb. 17, 2016 over allegations of money laundering and breach of public trust.

‘Affordable Housing not achievable without subsidy’