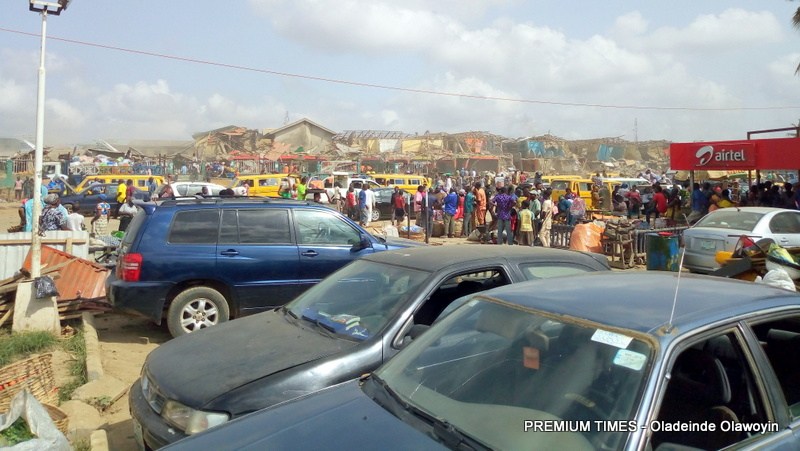 Officials of the Lagos State Government have begun demolition of the Araromi Oke-Odo Ile-Epo market in the state.

PREMIUM TIMES reported that the exercise created pandemonium in the market and its environs.

Officials came to the market with bulldozers early Friday morning.

Plan for the exercise was reported 10 days earlier.

Many traders scurried to evacuate their goods when the demolition began.

The exercise which started from the Lagos-Abeokuta expressway end of the market was coordinated by officials of the Lagos Environmental Safety Agency and armed police.

Passersby were prevented from taking pictures of the happening.

A PREMIUM TIMES reporter had his phones taken away from him momentarily until he struggled to regain the phones.

The demolition also caused gridlock on the Lagos-Abeokuta expressway with many road users stuck in the traffic.

A trader who identified himself as Garba said many of the traders could not salvage their goods from their stalls.

“Many who owned stalls at the frontal part where the demolition began could not evacuate their goods, ” he said.

“But those at the back have packed some things as you can see.”

Another trader, Tawa Kehinde said many would lose their sources of livelihood.

He called on the government to reconsider its steps.

At the far end of the road, some traders had a makeshift market by the roadside to sell the remnants of their goods.

The demolition was carried out allegedly on the instance of the Agbado Oke Odo Local Council Development Area.

Officials on the scene declined to speak when asked which authorising body gave the demolition order.