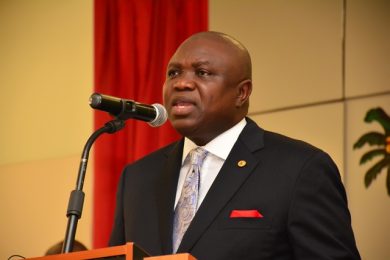 Lagos State Government on Monday accused some property owners of converting their residential buildings into religious centres in order to avoid paying the Land Use Charge (LUC).

Commissioner for Home Affairs Dr Abdulhakeem Abdullateef who stated this at the annual Ministerial Press Briefing to mark the third year in office of Governor Ambode’s administration warned those who indulge in such to desist from it and operate within the ambit of the law.

He said, “Do not convert your residential premises to religious premises. Many do that for the sake of being protected from paying their Land Use Charge and that will not be tolerated.

“Whatever we want to do, let us keep ourselves within the ambit of the law.

“As for those who are combining their residences with mosque or church, we are not going to demolish but what we said is that all residential premises are subject to Land Use Charge and so when officials of government come, don’t claim there is a mosque on the ground floor.

“Always know that as soon as your property is declared a residential block, you will pay Land Use Charge.”

The commissioner said the State Government, through the Ministries of Home Affairs and Physical Planning, had also commenced moves to address the conversion of residential buildings into religious centres via engagement.

“It is a violation of the state regulations for residential buildings to be converted into religious centres.

“When a building is approved for a purpose, it is an aberration for you to now convert it into something else without the approval of the Ministry of Physical Planning,” he asaid.

He said the state government has saved a total of N4.5billion in the last three years as a result of the decision of Governor Akinwunmi Ambode to stop the sponsorship of people for religious pilgrimages to Israel and Saudi Arabia, has said.

According to him, funds saved from the development had been diverted into the construction of roads and other amenities to make life easier for residents. Leadership