by viewpoint
in Housing, Editorial
1 0
0 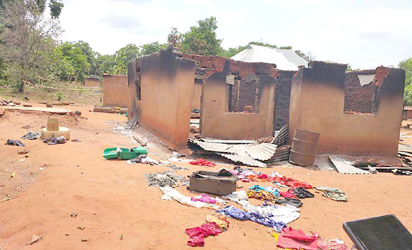 Last week alone, numerous houses were destroyed by arsonists and inferno. This is bad news for the real estate sector of the economy as investors in housing lost their investments and intending developers avoided the crisis-ridden places.

Houses were destroyed as a result of fire and attacks on communities in Benue, Nasarawa, Kogi and Zamfara states.

On Thursday, April 19, 2018, some persons stormed Naka, the headquarters of Gwer West Local Government Area, Benue state at about 11:00am and burnt houses to the amazement of residents.

The arsonists were said to be on a reprisal attack over the killing of one of their colleagues near the community on Wednesday.

“A soldier was killed by hoodlums yesterday [Wednesday], but I met with the Brigade Commander around 4:30am today [Thursday],” Francis Ayagah, chairman of the local council said of the possible motive of the arsonists.

He explained, “He [Brigade Commander] gave me a list of suspects and we arrested five of them overnight.

“A whole part of the town has been completely burnt down.”

The attackers were said to have spent over two hours burning down property in Naka, which is about 45 kilometres from Makurdi, the state capital.

Similarly, residents and officials in Benue state confirmed attacks on villages in Guma Local Government Area between Friday night and Saturday morning, with maiming, killing of residents and setting of houses on fire.

Terver Akase, spokesperson for Governor Samuel Ortorm said in a statement that Fulani herdsmen were suspected in the attacks.

“Ten corpses have so far been recovered with many others injured.

“The armed herdsmen also burnt numerous houses, shops and other property in the area.

“This mindless attack was unprovoked and we urge security agencies to arrest the herdsmen behind the killings for prosecution,” he appealed.

The communities are found in four Local Government Areas of Obi, Keana, Awe and Doma. Over 70 people were reportedly killed.

The State Commissioner of Police, Ali Janga said bandits invaded the sleepy agrarian community in the early hours of Sunday.

According to him, five houses and unspecified number of vehicles, tricycles, motorcycles and other property were set ablaze by the bandits.

“Yes, five lives were lost in the village but operatives of the police mobile force and soldiers repelled them and succeeded in killing five bandits and recovered some weapons. So far, normalcy has been restored in the area,” Janga said.

But the traditional ruler of Mozum community in Bassa, Khalid Bukar told journalists in Lokoja that the violence had spread by Sunday afternoon to Ozugbe and Biroko, two villages under his domain.

He said that a number of houses in both villages were completely razed by unknown hoodlums while five persons were shot dead.

The traditional ruler said those killed included the Madaki of Biroko, Mohammed Umar and four of his subjects.

Mr Bukar said that so many houses including that of the late Madaki were also razed by the invaders.

The traditional ruler said that he immediately informed security agents of the development but the damage was already done before their arrival.

The state police command spokesman, William Aya said in a statement that 15 houses were burnt down in Kpanche.

Though the report on Zamfara state attack captured mainly the dead, it is apparent that houses were destroyed.

Kenneth Ebrimson, the police commissioner in Zamfara state confirmed the death of 30 villagers in the attack on Zamfara communities on Thursday and Friday.

The police boss said the armed bandits have been on a renewed killing spree across the state in the recent weeks.

A gang of cattle rustlers is blamed on the attacks.

The headquarters of the Kaduna State Independent Electoral Commission (KAD-SIECOM) was gutted by fire on Friday.

Chairman of KAD-SIECOM, Mrs. Saratu Binta Dikko-Audu said the fire started around 10:30am and affected all the offices on the 2nd floor of the two-storey building.

She noted that the fire affected the office of the chairman, legal and finance departments and conference room.

She added, “No life was lost and there were no injuries recorded. At the time the fire started, the members of the commission were in an emergency meeting in the chairman’s office.”

The National Emergency Management Agency (NEMA) warehouse at Ikeja in Lagos was on Saturday 21 April, 2018 gutted by fire.

The South-West zonal spokesman of the agency, Mr Farinloye Ibrahim, confirmed the incident to newsmen, stressing that the warehouse was used to keep relief materials.

“The fire started at about 8.30 a.m. The damage was not much before the fire was put out. We cannot estimate as at now the cost of the materials burnt,” Ibrahim said.

The Director of Lagos State Fire Service, Mr Rasaki Musibau, told newsmen that a high tension cable fell on the roof of the warehouse which resulted in the fire.

“No casualties. We drew firemen from three stations to put out the fire. The firemen, officials of the Lagos State Emergency Management Agency and police put out the fire,” he said.

For us at Viewpoint Housing News, Shelter is Life. As advocate of solution to the Nigerian housing crisis, it troubles us when a roof is brought down. Happenings in the past week should prompt those overseeing affairs of the country to step up their actions. Fire service should do more in educating our people on handling of premises to avoid fire.

We are worried that these attacks are consistent. In each incident, many valuable belongings are lost. This is indeed, further impoverishing an already deprived people. Many Nigerians have become camp dwellers as they have lost their homes. Communities that were once lively are now desolate. Living in camps does not only dehumanise, it also predisposes Nigerians to disease and death.